Lecture performance: The Archive As A Site Of Political Confrontation. Or How To Sing Out Of Tune?, November 12, 2015, 6:30pm, brut (burt, die Bar) 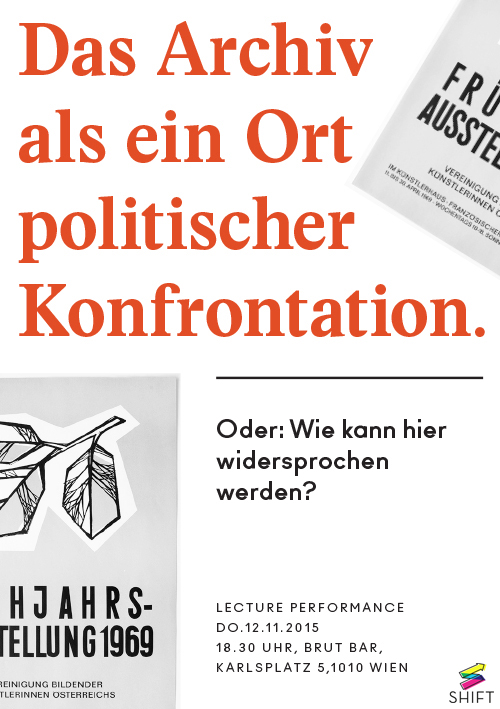 The Archive As A Site Of Political Confrontation.
Or How To Sing Out Of Tune?

in German with English subtitles

The lecture performance deals with the activities of the VBKÖ from the time of National Socialism until the 1980s. What kind of exhibitions were organized? Who were the members of the association? Was the role of the VBKÖ during the time of National Socialism discussed after 1945? Were the members of the association in touch with local feminist art movements during the 1970s?
We question the archival materials in terms of continuities, gaps and resistance in an attempt to figure out what space of action could the VBKÖ provide today. How can a historical engagement be a political intervention into the present?

“The video Wish (2010) is projected on two screens and the song Black Wish by The Last Poets fills the small seminar room of the University Program of Gender Studies (PUEG) at the National Autonomous University of Mexico (UNAM). All of us, participants of the seminar Del queer al cuir: desplazamiento geopolítico sur y desde las periferias / From Queer to Cuir: Geopolitical Displacement from the South and the Peripheries, organized by the poet, essayist and performer Sayak Valencia, rock our bodies to the song’s rhythm and at the end of the video we start a heated debate about gloves, white, brown, black, feminine, masculine, trans hands, fisting and post-porn. I am sitting – by chance and unknowingly – close to Katia Sepúlveda, the Chilean artist whose video has just been presented. She has been living in Germany over the last nine years. Soon enough we get to talk, I thank her for the presentation, and three years later I write her an email, asking if she would be interested in a conversation for a publication in Europe. A few hours later I find her consent in the inbox. The following exchange came about through several emails in a hybrid of German and Spanish, revisions and translations, over a period of one month from the middle of February to the middle of March 2015.”

For the whole conversation, see:

Pink Labor on Golden Streets: Queer Art Practices is particularly concerned with combining, juxtaposing, or playing off various artistic strategies where form and politics intervene. Two artistic attitudes, often perceived as divergent, are described here: the choice of form attributed to political issues versus political stances dictating the question of form. This book sheds lighton contradictory standpoints of queer art practices, conceptions of the body, and ideas of “queer abstraction,” a term coined by Judith Jack Halberstam that raises questions to do with (visual) representations in the context of gender, sexuality, and desire.