For this project I carried out an intervention in a regular lucha libre program by inventing the wrestling character SUPERDEVOLUCIÓN COPILLI QUETZALLI, promoting (press interviews, comic), writing (song lyrics) and staging the match PENACHO VS PENACHO in an arena in the north of Mexico City in order to wrestle with a disputed indigenous object from ‘Mexico’, the so-called Penacho de Moctezuma, which is part of Weltmuseum‘s collection in Vienna, Austria.

In the last few decades many countries have demanded the restitution of important cultural pieces to their countries of origin. A large number of art and cultural artefacts, among them the Penacho (also known as Moctezuma’s headdress), have had a long and troubled history. As most of these objects have now come under close analysis by postcolonial consciousness –their location in places outside their ‘countries’ of origin are inherently problematic– the Penacho, too, has faced several readings, discussions and calls for restitution. Since the beginning of the 19th century the Penacho –allegedly from one of the last Mexica leaders Moctezuma Xocoyotzin– has been part of the collection of the Weltmuseum in Vienna. Since 1958 a reproduction of the Penacho has been on permanent display at the National Museum of Anthropology in Mexico City.

The “right” of ownership and claims of restitution are unsettled. Moreover, restitution encompasses not only objects or pieces of land, but feelings, thoughts and beliefs, which are also part of human heritage. The discrepancy in the meaning of these objects between those who currently possess them and their claimants cast an enduring shadow on contemporary (neo)colonial discourse. Hence, the artefact –once displaced– becomes caught in an in-between place, never fully belonging to the country, which it hosts nor to the place it originated from.

The project El Legado Transcultural / The Transcultural Legacy attempts to question and set into motion, or better, into wrestling, the Penacho and the complex, differentiated, changing relations of power that go along with it. 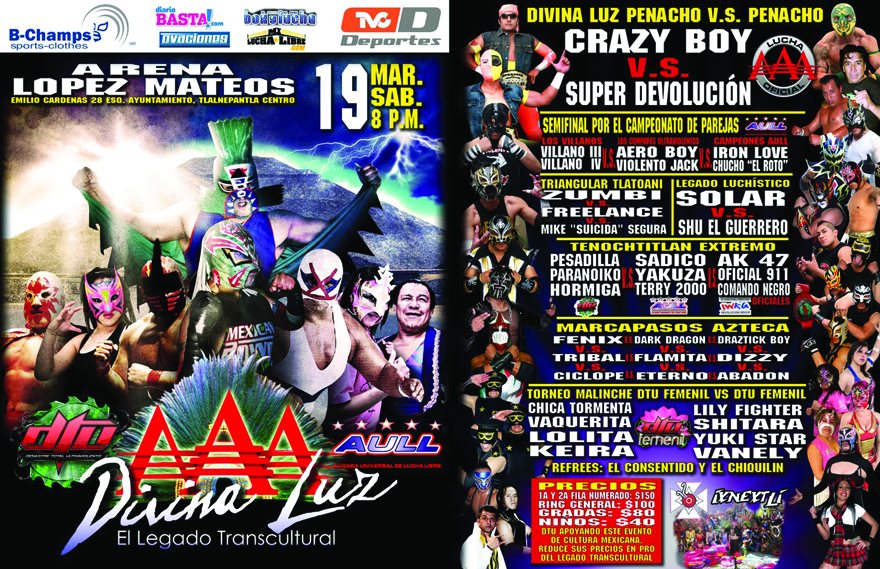 In Autumn 2011, a text and photos of the project were part of the art and culture magazine TIERRA ADENTRO (172), October/November 2011 in Mexico.
The installation was part of the exhibitions “La Quebradora: Lucha Libre in Contemporary Mexican Art” curated by Amy Pederson at the Mission Cultural Center for Latino Arts, San Francisco; “All Work No Play” curated by Adriana Marques and Eva Martischnig at the ACF London (2012) and “a work, that can’t shake off what it reflects“ at the Kunstpavillon Innsbruck and the Kunstraum Exnergasse, Vienna (2011).