Somewhere Between Desire And Waiting

Somewhere between Desire and Waiting derives from a fascination with an understanding of identity as unstable and unfixed. I used the form of the interview as a research method and developed my work based on conversations with two people who had started a process of gender transition.

By obtaining different narratives of their experiences I became aware that we also construct ourselves through narratives: Identity emerges from this process of narrative and from the communication with the other that narrative makes possible. Through fictionalizing the narratives, which were generously shared with me, I attempted to tell stories about the instability of identity.

These stories, which I told again and again but with slight changes, were presented in the form of a book or more precisely the inside of a book: The uncovered, glue-bound section of pages numbered 309 to 422 appear to be excised from a complete, bound novel. By engaging in Somewhere between Desire and Waiting the readers ideally write themselves into it, becoming thus a part of an ongoing process of the construction of narration and identity.

Somewhere between Desire and Waiting was distributed in different hotels on bedside tables suggesting that they might have been forgotten, in trains on tables where newspapers were waiting for the next reader and in small, selected book shops such as ART METROPOLE.

Shortlisted for the Walter Tiemann Prize 2006 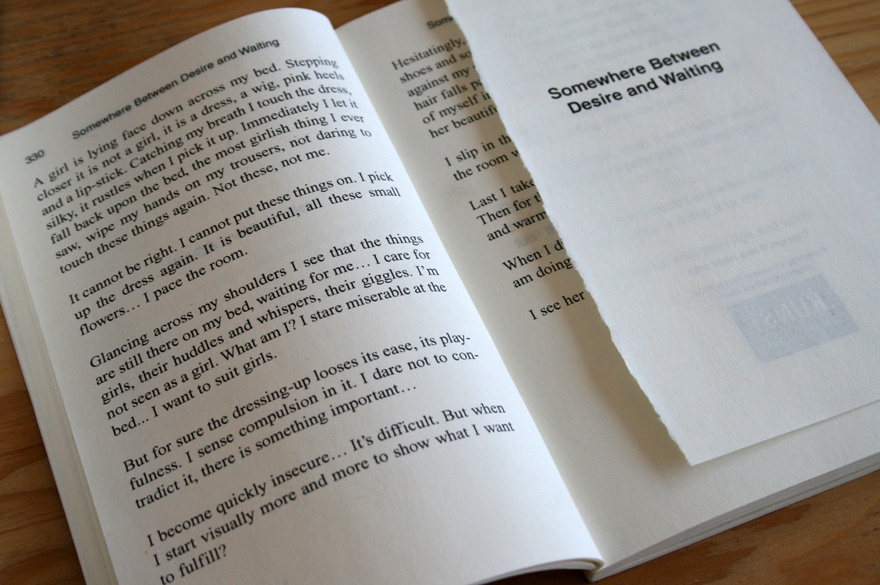