In 2008, the exótico (queer) wrestler Polvo de Estrellas invited me to film him before, during and after a lucha (wrestling match) in a social center, which had turned into a temporary arena, in the rough district Iztapalapa in the East of Mexico City.

The video installation is a remnant of these situations. It dwells on the transitional state of exóticos in the changing room and the physical, gestural and/or verbal interactions between the audience and the wrestlers.

It is in the changing rooms –which exóticos share with luchadoras (women wrestlers)– that the luchadorxs acquire another identity. They change their names, their clothes, put on make-up, wigs and/or masks, sing, smoke, read, gossip, warm up, and share their emotions. The changing room is a space where the luchadorxs ideally feel unconstrained in their being and mobility, where an invention and transformation of one’s self takes place. The luchadorxs are in a transitional state as it is only there where for the moment of un/dressing that identities coincide. Before and after the luchas are thus perhaps the ultimate drag moments, where one is both him/her/themself and other, and maybe even another person.

The luchas minimize the distance between performers and spectators, constituting both as participants. Performers and spectators project and construct imageries simultaneously, both becoming accomplices in the luchas’ secrecy. The gesture of a kiss, which is demanded, fought over, received and given to render by the wrestlers and the audience alike, plays an important role within the interactions between the audience and the wrestlers.

It certainly matters where, when, and by whom the kiss is done. The support of the audience as an emotional state also comes into being for the execution of the kiss. Each time and place the kiss triggers a different reception and it may be experienced in a different way. The kiss has the capacity to simultaneously disturb and unite: It might have upset the one who received a kiss and/or the audience, but at the same time it united the kissers – and maybe even the audience with them.

ANTES Y DESPUÉS ¡BEEESOOOS! was part of the exhibition “All Work No Play” curated by Adriana Marques and Eva Martischnig, ACF London (2012). 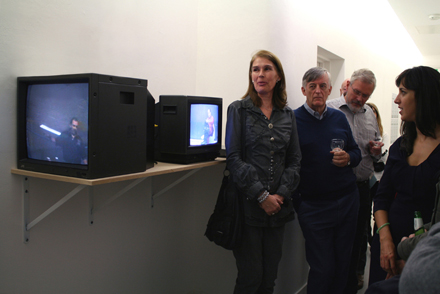