During rambling through my neighbourhood Lavapiés, where I lived in Madrid (ES) from November 2005 to March 2006, I found an supposedly empty, disused space called UTOPIA.

As a “country of nowhere” utopia is mentioned in a dictionary. Nevertheless for this country exists endless concepts that are possible to differ of a plain impossibility, as Robert Musil argues, because one can dissolve a possibility of the contemporary, prevented complications and grant its development.

Beginning of 2006 I decided to print 500 photopostcards of the space (see image) with the question: What would you do with this space? These cards were mailed to people and distributed in its neighbourhood attempting to trigger thoughts about utopia.

1 Mail art
a) Beginning 2006 I sent cards to people that I know in Spain, Austria, Germany, The Netherlands, Hungeria, Czech Republik, Portugal, France, India, Slovenia, USA to spread them as well in these countries and with the help of www.postalfree.com’s addresslist I added cards to the already existing card boxes in different places in Lavapiés.

c) The project is part of Evolution de l’Art, a gallery for contemporary art which only sells artworks that are immaterial, with no physical residue, and it does not release certificates of authenticity, nor statements or receipts. EdlA represents, on a non-exclusive basis, artists whose artwork is, at least in the case of some specific projects, alien from any physical-material component: http://crazycurators.org/edla/artists/n_hochtl.html

2 A blog http://utopia-esquina.org/
Attempting to bring the examination and discussion from a real spot into the virtual space as well as making it easier for people to participate wherever they live a blog got created at the end of 2007: All the answers, that I received are presented and interested people can react on them and blog their own ideas, get to know information about the project and links to projects, books and/or articles related to utopia.

3 Installation
Through presenting the blog, where visitors could participate right away with their own ideas, and displaying all the received answers, visitors get to know all the different thoughts and ideas attempting to “think the unthinkable”, as one participant calls it. 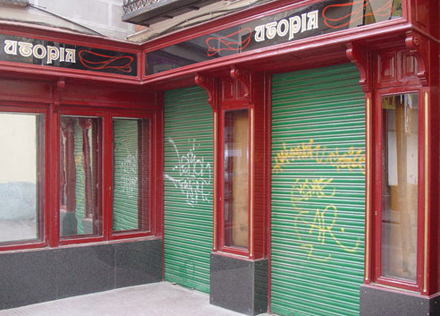