In 2021 I researched into the Arch Fem archive (Innsbruck) and selected a four posters series from 2006; these posters link visionary pasts sourced from the archive to visionary futures in 2068. Taking these collectively conceived radical speculative fictions as a starting point four new designs were conceived in collaboration with ArchFem, INVASORIX and SGKAL.

Back in 2006, ArchFem had placed collectively developed feminist messages from the year 2068 in public spaces of the city of Innsbruck. The 2006 poster series “Ausgetrickst und eingenommen” [“outwitted and occupied”] celebrated that women’s shelters are superfluous, that women earn 30% more than men, that her mind is as beautiful as her body, and that in 2068 a PoC-Popess gives up the church’s fortune.

For the 2021 the augmented iteration, the poster series applauds that in 2068 abortion had finally been removed from the penal code, polyamory is a common practice of relationships, feminicides belong to the past and care work is globally and cooperatively organized. 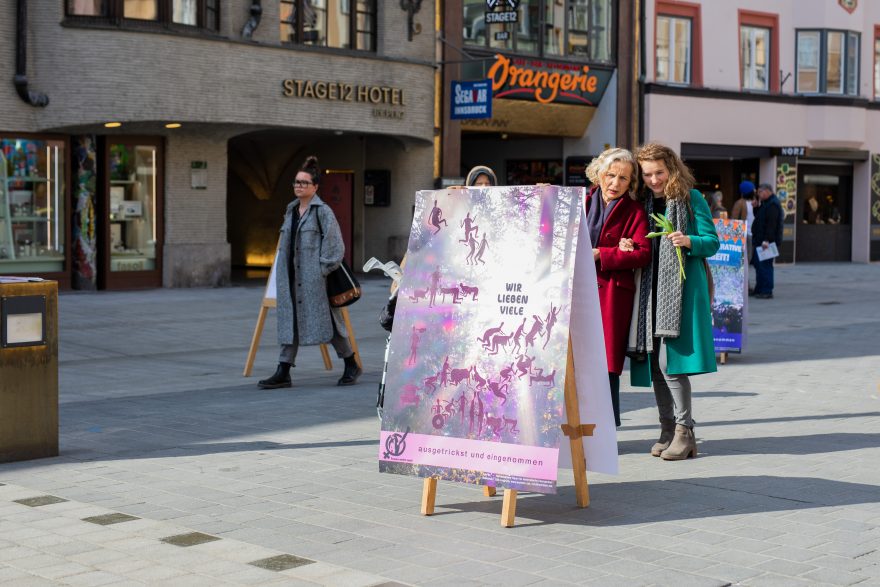 In cooperation with ArchFem-Interdisciplinary Space for Feminist Intervention (Innsbruck), INVASORIX and SKGAL.

After having been a part of Frauen*kampftag Innsbruck I Womxn’s Struggle Day Innsbruck 2021 the poster series From the Year 2068 was on display and free to take away in the exhibition A Haunting from the Future at Kunstraum Innsbruck from March 9 to April 10, 2021.

Alongside the series “Ausgetrickst und eingenommen”, From the Year 2068 is now part of ArchFem (Innsbruck) and STICHWORT-Archives of the Women’s and Lesbians’ Movements (Vienna).